Get information on Pynchon's works and their literary contexts, on blog posts, services, features, and offers and subscribe to the Reading Pynchon | Newsletter here or anywhere else on this website!
You are here: Home / Blog / Umberto Rossi and Paolo Simonetti on Pynchon and the “IPW” in Rome 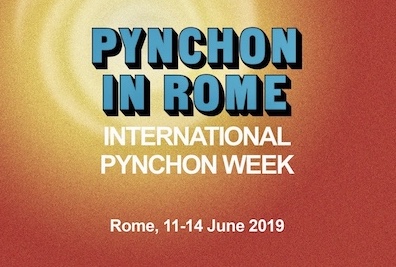 I’d really like to see someone in the States offering to host the next IPW. All the IPWs have been held in Europe, but I do believe it’s time that Tom gets back home.

Earlier this year, I had asked Umberto Rossi and Paolo Simonetti about their personal experiences with Pynchon, their research interests relating to Pynchon, and about organizing the International Pynchon Week (IPW), which starts in a couple of days (11-14 June, Rome – more information here and on the facebook page of the convention: Pynchon in Rome 2019).

Umberto Rossi teaches English language and literature at the Liceo Scientifico I. Newton in Rome. He did his Ph. D. in Comparative Literature on First World War narratives, has published numerous essays, among them one on firearms in and around Mason & Dixon (Rossi 2014), translated Philip K. Dick’s The Three Stigmata of Palmer Eldrich into Italian, and wrote a monograph on Dick: The Twisted Worlds of Philip K. Dick (Rossi 2011).

Paolo Simonetti currently teaches Anglo-American Language and Literature at the Sapienza Universitá di Roma. He did his Ph. D. on conspiracy and paranoia in postmodern American fiction (Simonetti 2009), was a visiting scholar to Columbia University in New York (USA), worked on the translation of comics into literature and vice versa (Simonetti 2014), and, together with Umberto Rossi, for the 50th anniversary of Pynchon’s V, edited a series of essays on Pynchon’s first novel: Dream Tonight of Peacock Tails (Rossi and Simonetti 2015).

In his review of Dream Tonight of Peacock Tails by Umberto Rossi and Paolo Simonetti, Albert Rolls critically acclaims:

The value of ‘Dream Tonight of Peacock Tails’ rests not just on the strength of the articles and the directions toward which they may lead us but also on how they complement each other to generate insight that they would not have produced on their own. Many readers, of course, will pick and choose which articles to read based on their research interests, but Pynchon scholars will be well served if they read the collection as a book rather than treat each article as an isolated work in itself and seek out the connections among the various contributions.

I am grateful for both Umberto Rossi and Paolo Simonetti taking their time amidst organizing the IPW and their daily tasks and answering my interview questions!

Read the interview and feel free to tell us about your first Pynchon novel and your personal interests in Pynchon by replying at the end of this blog post!

Reading Pynchon: What was the first Pynchon novel you read?

Umberto Rossi: I reckon it was V. Well, to tell you the truth, I didn’t like it. But then I read Gravity and got confused. At that time my reading abilities were quite limited.

Paolo Simonetti: The first novel by Pynchon that I read was Gravity’s Rainbow. It was 2003, I had just finished writing my M. A. dissertation on Sylvia Plath’s poetry, and I was looking for something completely different. I picked up the huge paperback Italian edition of Gravity’s Rainbow in a bookstore and I was flabbergasted by the richness of its language, the craziness of its plot, the abundance of characters, themes and schemes: it was funny, irritating, rewarding and frustrating at the same time, lyrical and obscene, chaotic yet meticulously plotted. Astonishing. The reading experience of a lifetime.

Reading Pynchon: Please tell us about your experiences with your first Pynchon novel.

Umberto Rossi: The moment when I began to really get into Pynchon was when I was listening to the radio and the speaker read news about the Herero people protesting when [the German, Reading Pynchon] Prime minister Kohl visited Namibia [in 1995, Reading Pynchon]. They wanted compensation for the atrocities committed by von Trotha after issuing his notorious “Vernichtungsbefehl”. Then I realized that there was more to V than I had seen at first sight. And then I reread Gravity, and then, and then, and then …

Paolo Simonetti:  I happened to be in a predicament very similar to that of many characters in Gravity’s Rainbow: I was about to graduate and I didn’t know what to do with the rest of my life. Gravity’s Rainbow – and later all the other Pynchon books that I immediately managed to read – taught me to “keep cool, but care”; not to worry (too much) about the future, not to make elaborate plans in advance, because in the end we are all characters in plots.

I also love ‘Mason & Dixon’, which I consider a more mature book, carefully structured, with an engaging plot, a sublime language and a perfect modulation between content and form.

Reading Pynchon: What do Pynchon’s novels mean to you?

Umberto Rossi: A lot. Pynchon is one of my favorite writers, like Philip K. Dick or James G. Ballard or Jonathan Lethem. I’ve written essays on Pynchon, talked about Pynchon to friends, acquaintances, and colleagues. I attended several Pynchon Weeks. And now I’m busy organizing one with Paolo Simonetti and Giorgio Mariani. Pynchon is addictive, and I’m a Pynchon junkie.

Paolo Simonetti: After having digested Gravity’s Rainbow I went on to devour Libra and Underworld by Don DeLillo, The New York trilogy and The Invention of Solitude by Paul Auster, The Public Burning by Robert Coover, The Floating Opera by John Barth, Slaughterhouse-Five by Kurt Vonnegut, Catch-22 by Joseph Heller and by then a year had passed and I was working on a Ph. D. project on conspiracy and paranoia in postmodernist American fiction that years later would become my first book: Paranoia Blues [Simonetti 2009, Reading Pynchon].

Reading Pynchon: Which Pynchon novel or short story is your most favorite one today? Please, explain why.

Umberto Rossi: The California Trilogy: The Crying of Lot 49, Vineland, and Inherent Vice. Because California is Philip K. Dick’s territory, and to a certain extent it’s also Lethem territory.
Three writers I like have set their work in that state: that’s enough to prefer three California novels by Pynchon, different as they may be.
By the way, I don’t know why, but when I am in LA I feel at home. It’s a place with a very short history, like the town in which I grew up – not all Italian cities were founded by the ancient Greeks or the Romans, you know. I lived in Pomezia, near Rome, for 38 years, and Pomezia was built in 1938-39. It’s younger than NYC or LA. This might be the reason why I consider myself a displaced Californian.

Paolo Simonetti: Today Gravity’s Rainbow remains my favorite Pynchon novel, because of what it meant to me in that particular period of my life. I also love Mason & Dixon, which I consider a more mature book, carefully structured, with an engaging plot, a sublime language and a perfect modulation between content and form.

Benjamin Franklin depicted as a rapper or Washington smoking a reefer in ‘Mason & Dixon‘ … How can you resist?

Reading Pynchon: What aspect of Pynchon’s literary work are you most interested in?

Umberto Rossi: It’s a long list. but I focus on his ability to make us see history from a very peculiar and unorthodox point of view. We Italians have a great historicist tradition, and Pynchon appeals to our sense of history and the past, just because he can turn them upside down.
Benjamin Franklin depicted as a rapper or Washington smoking a reefer in Mason & Dixon … How can you resist?

Paolo Simonetti: Pynchon’s phenomenal prescience never ceases to amaze me. He manages to tackle themes and events that would become relevant and central just a few years after he organizes a book around them. Let’s just think of the white suprematists in Inherent Vice (2009) and what’s happening today in the US and Europe! This is an aspect I’d like to deal with sometime in the future.

Reading Pynchon: If you had the time and means to write a (new) book on Pynchon – what aspect of his works would you focus on?

Umberto Rossi: I wanted to write something on the California Trilogy, but a very good collection of essays on Pynchon and California has been published lately [see McClintock and Miller 2014, Reading Pynchon]. So at the moment I do not really have an idea for a book. I’m thinking of something about Pynchon and the media, an almost infinite field of research, but I wonder whether I’ll have time to work on that.

Reading Pynchon: Please tell us about your hopes and expectations for the International Pynchon Week 2019 in Rome.

Paolo Simonetti: When Umberto asked me to join him in the organization of the Rome IPW (well, he actually pulled me off of my ongoing literary projects, coercing me into this adventure), I accepted because I think that today the Italian publishing industry has somehow relegated Pynchon to the margins, maybe also because of the not impeccable translations of his most recent works. That’s particularly bad, because the first translation ever of a book by Pynchon was the Italian edition of V published by Bompiani in 1965, immediately followed by L’incanto del lotto 49 in 1968. I think Pynchon deserves much more consideration, and his works should appear in every Italian bookstore, together with novels by much revered figures such as Philip Roth, Don DeLillo, David Foster Wallace.

Umberto Rossi: I hope that we may have a conference as good as the previous ones. That this may be the starting point for other projects like Pynchon in Context [see Dalsgaard 2019, Reading Pynchon], that wonderful reference book which will be published by Cambridge UP later this year. That Pynchon may appear. Ok, this is rather unlikely, but you never know ….

(…) I don’t really know how they could organize events before the Internet, email, the social media.

Reading Pynchon: Contributors to the International Pynchon Week in Rome this year cover a wide variety of topics. In what sense do the contributions offer new insights into or new readings of Pynchon’s works?

Umberto Rossi: It’s a bit too soon to say. This is a question I might answer after the conference, but I have been struck by the fact that we have two panels on Bleeding Edge, Pynchon’s last novel. It may mean that the scholars have metabolized it. I do look forward to those presentations.

Reading Pynchon: Could you tell us about your experiences when organizing the International Pynchon Week?

Umberto Rossi: Let’s say that I don’t really know how they could organize events before the Internet, email, the social media. It’s been easier than we thought, and I must thank professor Giorgio Mariani who accepted to host the event at the Sapienza University in Rome. Once you have a venue, it’s all downhill, as we use to say in Italian …

Reading Pynchon: Where will the next International Pynchon Week take place?

Umberto Rossi: I wish I knew, man! That will be decided during the IPW, based on the proposals that will be submitted.  Well, I’d really like to see someone in the States offering to host the next IPW. All the IPWs have been held in Europe, but I do believe it’s time that Tom gets back home. Ideally it should be in NYC or in LA. But this is just wishful thinking.

Reading Pynchon: Thanks a lot for the interview!

Read first about the publication of new blog entries on Reading Pynchon, get additional information on events, new resources and publications, and on what other “Pynchonians” write about!

* Make sure to check your in-box or your “WASTE”-folder (spam) to confirm your subscription!